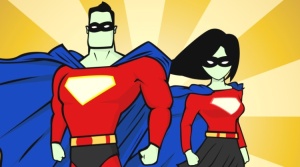 To the chagrin of many, cinemas are proliferated with films about heroes and superheroes. Masked, caped, and spider-bitten men and women display super-human strength and speed, much-needed traits given the evil they will be warding off for the next few hours. Time and again, these heroes defeat evil just in the nick of time, preventing something terrible from happening, like the death of every human being on Earth, for example. These heroes have so predictably saved the day for so long, the entire genre is now turning in on itself as heroes become anti-heroes and the bad guys are winning more often to keep it real. Perhaps Hollywood was sensing the staleness of their tales.

I’m certainly in the camp of those who find these films utterly boring. The superiority of these heroes makes them impossible to relate to and I just can’t bring myself to care if the world comes to an end or if this league of X-Men or that band of avengers wins or loses.

I’m far more fascinated with real heroes, men and women who find themselves in a time and a place where they will truly make a difference. For example, we routinely give credit to our police officers, firefighters and emergency personnel as heroes, brave men and women who run into buildings or scenes that everyone else is running away from. Or there is the occasional Good Samaritan story of the citizen who intervenes to save someone who is drowning, trapped inside a wrecked car, or choking on their steak in a restaurant. I appreciate the detectives and scientists who patiently work a criminal case to see that justice is served. Any one of these stories is infinitely more interesting than an alien who can fly defeating other aliens with laser vision precisely because they are real and the consequences will usually be felt for decades.

What are the marks of these real life heroes? At a minimum, they 1) are courageous. They 2) place the needs of someone or something above themselves and they are willing to take risks to serve them. They 3) are confident in their ability to help, not burying their talent in the ground. And they 4) are willing to bear the responsibility for the decision that they have made.

As the pastor of a small church, I am in need of heroes, brave men and women willing to cut against social norms both within and without our current church culture. And as I see report after report about the huge numbers of church closures in America, I know I am not alone. It was a full century ago that our congregation had to give up on more immigrants coming to America to keep populating the membership roll. (Our congregation’s history is German.)

And I have given up thinking that a wave of easily-had members will walk through the door to help our congregation accomplish the mission we believe God has given it. I believe that those who are looking for an easy church home, one where they can remain relatively hidden, one where they can both possess the covering of religiosity and the anonymity of a large church are already at said large churches. And that will not likely change.

So what our congregation – and all of the small congregations like it – needs is heroes; men and women willing and able to “take the road less travelled” (a poem we all love but few of us rarely live by) and support a small, neighborhood congregation. The process for them will be hard because, for many under 40, they will come from a background that includes a mixed bag of religious experiences, no religious experience at all, and/or a culture that fundamentally believes regular church attendance is strange. They will not have any comfort in numbers; rather, they will be singled out as a visitor, probably by a surprised congregation that hasn’t seen many new faces recently.

There will be a process of integration that is unfamiliar to most, as those kinds of socialization processes are rare anymore. After all, we live in the era of “unfriending” people and “ghosting” them when they annoy us. And as we are all “so busy,” visiting or joining a small congregation will drain you of some of your free time, for you will certainly be asked to help out at the church, say as an usher or on a Saturday work day or – gulp! – to help do some evangelism.

Yes, in a big box culture where our freedom is prized and small groups of real human beings makes us nervous, it will take nothing less than heroes to keep small, neighborhood churches alive. I am so thankful for all the heroes that have joined our congregation over the years. I know it isn’t easy for them, and yet, there they are. I should probably tell them how highly I value them more often.

But to all the “young people” out there who may feel tired of being sold to or taken for granted by corporations, undervalued at work, burned out on social media, and ignored by the large congregations, I know a place where you can be a genuine hero. No, maybe you won’t save a life or escape a burning building, but you will help a vital institution survive, an institution needed now as much as ever amidst this wicked and sinful generation: the small church. Be a hero and stop in on a Sunday. I can all but guarantee you that they will be glad you did, and if it is a healthy, Bible-based congregation, you will be glad you did as well.