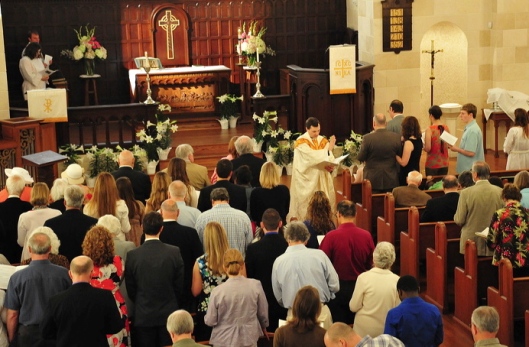 The Protestant Church at large has worked hard in recent years to help parishioners see themselves less as members of a church, and more as disciples of Jesus Christ. It rightly understands that the true work of the Church is discipleship, or following Jesus, rather than the creation of a social club, a trap into which churches can easily fall. This change in concept is in large part due to the devastating losses which the Church has experienced over the last five decades, as Mainline Protestantism has seen its relevance and influence practically disappear.

“What do we do?” pastors asked each other as their flocks slowly dwindled from four- to three- to two-digit totals. The answer was staring them in the face as it had since the first century: recommitting themselves to the Great Commission and making disciples.

Concurrent with this change in focus were the worship wars between “evangelical” Protestants and “confessional” Protestants. Their arguments were essentially over worship styles, what we now call “contemporary” or “traditional”. “We have to appeal to the culture if we ever want to reach the next generation for Christ!” yelled the evangelicals. “We have to stay true to our identity and not be conformed to the world!” yelled the confessional types. The evangelicals blamed the decline in Protestantism on a failure to connect with contemporary culture. The confessionals blamed the decline on the Church’s abandoning its core identity and thereby becoming indistinguishable from the world.

​Where do these two issues of worship and discipleship intersect? In general, it seems that those pastors and churches who have emphasized discipleship have been of the more evangelical persuasion. Discipleship was seen as an emotional commitment, a life-changing choice. Discipleship was often encouraged with emotionally uplifting music in the background and constant calls to go deeper, higher and further in your walk with the Lord.

​Again, in general, going deeper into discipleship became nearly synonymous with evangelical worship; both appealed to the need to be an active Christian. Liturgical types were seen as endorsing a passive Christianity, a kind of blind adherence to the liturgy.

​Those who clung to liturgical worship thought that the liturgy had been part of their discipleship all along. While those in the pews and those in the culture simply saw the liturgy as the “old” way of doing things, the confessional/liturgical types were wondering what all the fuss was about. Their commitment to traditional forms of worship was the living out of their commitment to their formation by Jesus himself.

While I think the confessional/liturgical folks were right in their way of thinking, they were probably wrong to assume that those in the pews made a connection between discipleship and liturgical worship. And just in case I might make the same mistake, let me offer some thoughts.

Liturgical worship and discipleship are intricately bound together. While contemporary worship will, for many, move us emotionally, liturgical worship forces us to work with a counter-cultural, historical, and Biblical form that shapes us more deeply than emotional highs. Liturgical worship is the cornerstone of what discipleship is really all about: adhering to a higher form, a greater good, a foreign truth that is expressed over and above how we feel.

​Far from hindering our walk with the Lord, liturgical worship, and our commitment to it, is the first step in saying to the world that we are willing to worship God in a way that is different from the music of popular culture, or is even rejected by popular culture. Far from being a mere taste or preference, liturgical worship is a discipline that disciples embrace because it lifts up God’s Word and his Sacraments. And far from being a time to “go through the motions”, the liturgy offers Bible stories, passages and the sacraments week in and week out.

I, for one, am always struck by the sober truths of the Confession, the Creed, the Word, the Lord’s Supper and the Lord’s Prayer. These things never seem stale to me, but instead are always challenging my sins, my preconceptions, and my shallowness of faith.